These sudden altitude jumps do not happen on the usual trekking route. A common Annapurna circuit trek is a 14-16 day-long trek. It is an anticlockwise route starting from Chame. There are varied routes on the Annapurna circuit trek. The days of the trek varies based on the route. People use alternate routes for various reasons. But along with that bring risks of health hazards like altitude sickness. 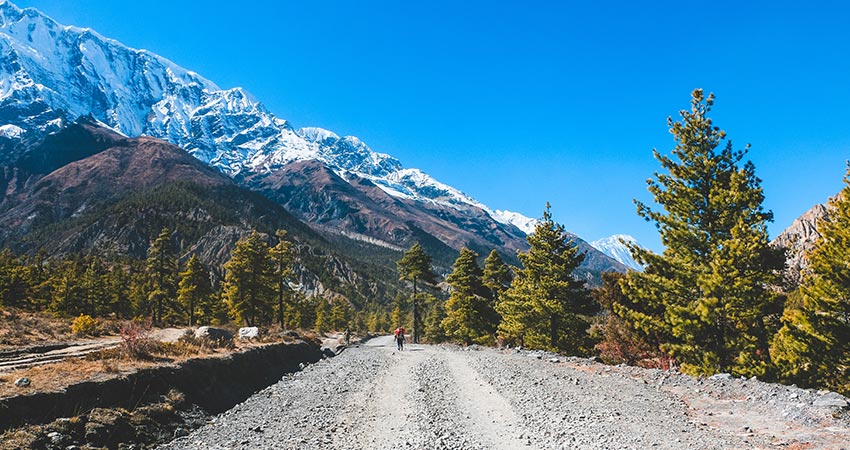 What is altitude sickness?

Altitude sickness is a health hazard when a person rapidly ascends to a high altitude. It occurs above high altitudes of 2500 meters and above. It happens due to a lack of oxygen.

Most of the Annapurna trek is spent above the altitude of 2500 meters. So altitude sickness is very probable.

What are the symptoms of altitude sickness?

The most common symptoms of altitude sickness are headache, dizziness, and exhaustion. You might also lose appetite, have short breaths, and feel nauseous.

A person will not immediately get sick at a high altitude. Their body needs to be accustomed to a high level. A sudden change in oxygen levels in the blood will cause your heart and lungs to work harder. It results in a high pulse and a high breathing rate.

It is a process in which our body becomes accustomed to lower oxygen levels in the air. It takes place gradually as you progress through higher altitudes. It is usually achieved by resting or staying at the same altitude level. You can also achieve it by ascending very little.

What consequences and remedies does altitude sickness have?

Acute Mountain Sickness(AMS) is the initial phase of altitude sickness. It is a very common occurrence while traveling from lower to higher elevations.

AMS shows its symptoms within half a day or a day of reaching higher altitude places. AMS gets better with acclimatization and rest. The symptoms of AMS are very similar to dehydration symptoms. The major symptoms of it are headaches and difficulty in breathing.

The most common symptoms that are distinct to AMS are as follows:-

Remedy – The most common remedy for AMS is rest and rehydration. Avoiding caffeine and alcohol can also help. The symptoms of AMS can be mitigated easily. But these symptoms shouldn’t be ignored as they can manifest into something worse.

High-altitude pulmonary edema is a second-level form of altitude sickness. It usually occurs due to the collection of extra fluid in the lungs. Such a condition will lead to difficulty in breathing.

HAPE is a life-threatening form of non-cardiogenic pulmonary edema. It occurs in lowlanders who suddenly ascend to higher-altitude places.

The occurrence of HAPE depends upon the major causes of regular altitude sickness. If you have a higher ascent rate and do not rest or acclimatize, you have the risk of HAPE. Furthermore, if you ignore the signs of AMS, it might result in HAPE.

Your general health condition may deteriorate if you already have moderate altitude sickness. Your symptoms may become severe. If these symptoms persist, you must immediately descend to a lower elevation and rest. If not treated promptly, HAPE can be fatal.

The symptoms of AMS and HAPE may coincide. After all, HAPE is a worse form of AMS. You should be cautious of following symptoms to know if you have HAPE.

HAPE is way more dangerous than AMS. It occurs due to fluid in the lungs. Such a condition can worsen HACE, which causes the occurrence of liquid in the brain. If you have symptoms of HAPE, you cannot treat it by simply resting.

Remedy – You ought to have supplemental oxygen to mitigate its symptoms. You need to be taken to a lower altitude place. Symptoms of HAPE subsidize within 2 or 3 days of rest at a significantly lower altitude. After you recover from HAPE, you can move slowly, with caution, and resume ascent on your trek.

High Altitude Cerebral Edema is the most intense form of altitude sickness. It is a level-three altitude sickness that occurs at altitudes higher than 6000 meters. Since HACE occurs at such a high altitude, it is less likely to occur in the Annapurna circuit trek. But It can occur due to ignorance of AMS and HAPE symptoms.

HACE is similar to HAPE. HAPE is the occurrence of fluid in the lungs, and HACE is an occurrence in the brain. It causes leaky brain capillaries, resulting in fluid accumulation and brain swelling.

The symptoms of AMS and HAPE were quite similar. But symptoms of HACE are way too scary. To identify the occurrence of HACE, see the following symptoms.

The occurrence of HACE could be common in mountain climbing expeditions. You might see people suffering from it if you climb the Annapurna mountain. But it might not occur in the trek.

Remedy– The best way to treat HACE would be an oxygen supplement with dexamethasone. Immediate helicopter rescues are available on some mountain expeditions. HACE can be life-threatening if the victim does not descend or medications are not administered immediately.

The best way to mitigate HACE in the Annapurna circuit trek is to caution against AMS and HAPE.HACE is likely to occur only after the worsening of AMS or HAPE. Just taking simple steps to prevent basic levels of altitude sickness is enough. 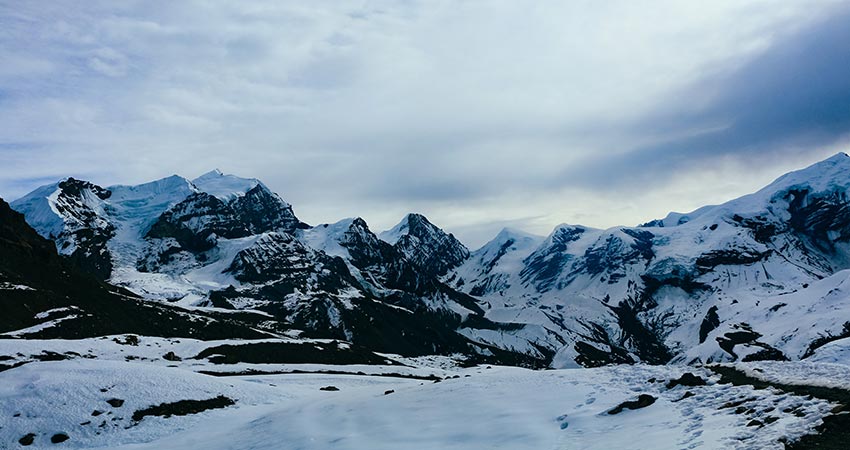 Risks of Annapurna circuit altitude sickness based on itinerary

These are the risks that can be imitated by planning a better itinerary. If you choose an itinerary that has short days and very steep routes, it will likely increase your risks of altitude sickness. But a longer one with a lot of rest will mitigate such risks.

Here is a comparison of two itineraries available for the Annapurna circuit trek.

The more dangerous itinerary is a trekking route that takes less than ten days to complete. This is the order of the route.

The journey will start with a six- to seven-hour drive from Kathmandu to Dharapani. From there, you must hike through steep, forested trails toward Chame. The Pisang village will then be reached by ascending further. It is a very small residential area with only 150 houses.

The following day, you will pass through Narodhara, Humde, Mugje, and Bhraka, and the wooden bridge over Marsyandi. You will make your way to Manang.

Then you will travel to the Thorung La Phedi.

The next day, you will reach the highest point of the trek. It will entail traveling to Muktinath and crossing the Thorung La pass. The following day, you will trek from Muktinath to Jomsom. You’ll fly from Jomsom to Pokhara after your 6-day trek around the Annapurna Circuit.

It starts with a drive from Kathmandu to reach Chame through Besisahar by jeep. The walking portion of the journey begins in Chame. Throughout your journey, you will encounter Tibetan culture. There are several tea houses with lodges in the area.

As you travel through a subtropical forest toward Pisang-Manang-Yak Kharka. You will spend a day at Manag to acclimatize. The trail then climbs higher as you pass Yak Kharka. You’ll first arrive at the Thorung La High Camp. From Thorung La high camp, head downhill towards Thorung La Phedi on a safer trail. From the Phedi, you will hike toward the Thorung La Pass (5416 meters). This is the highest point of your journey.

After passing through Thorong La Pass, the trail will take you to Muktinath. Because it is a highway, the road to Muktinath is quite dusty. The buses and jeeps make the journey quite unpleasant. As a result, many people choose not to trek this section of the journey. A direct jeep ride to Muktinath will be a more enjoyable journey.

Following Muktinath, the route takes you to Jomsom and the Ghorepani-Poonhill viewpoint. You then descend to Tikhedhunga and drive to Nayapul. Your journey will end in Pokhara from Nayappul.

Contrasts and similarities between the itineraries and risk analysis

The usual route of the Annapurna trek is the anticlockwise route trek. It was specially designed to accustom trekkers to the altitude. The anti-clockwise route of the trek provides natural acclimatization because it begins in Besisahar and gradually ascends to Thorong-La Pass. You will have walked for several days before passing Thorong-La Pass and have had plenty of time to acclimate.

Both these treks follow the anticlockwise route. But one is better than the other.

The rapid trekking days will be very strenuous. People opt for short 6-day treks thinking it will be convenient. However, it comes with greater risks. It requires direct travel from Manang to Thorong La Pass within two days. The altitude difference between Manang(3519 meters) and Thorong La Pass(5416 meters) is 1897 meters. Such a steep ascent is life-threatening.

On the other hand, the 17-day usual route itinerary is considered a safer option. Your itinerary will be broken down further. For a safer ascent, you will acclimatize in Manang and go to Yak Kharka in a day. Thorang La Pass comes with a slow but sure ascent.

Apply the “remedy” recommendations given above to mitigate the symptoms of altitude sickness. Rather than that, try not to get altitude sickness at all. Travel with a better and safer itinerary and acclimatize well.

You could also do a 10- day Annapurna circuit trek with a similar itinerary to the 17-day trek. But has a shorter route back. Descending will not bring risks to altitude sickness. Such itineraries are safer in terms of health hazards.

Make sure you have travel insurance made beforehand too. Such insurance will manage rescue helicopters in case of emergencies.

Furthermore travel with guides to help you. Guides are experienced, and they will give very nice tips and tricks to help you. Trek in a group to have support in case anything goes wrong.