The Rolwaling Valley is located in the north-eastern part of Nepal. It is one of the most beautiful places in the country. The valley is also known as the home of the mythical mountain man Yeti. It is very close to the border of Tibet and lies between the Langtang Region and the Khumbu Region. The Valley is one among the seven hidden valleys of the Himalayas. Relatively lower number of people visit the valley compared to the adjacent Langtang and Khumbu Region. Therefore climbers and trekkers to Rolwaling Region enjoy a crowd free experience during all seasons.

White Langur, Snow Leopard, Jharal, Mountain Fox are among the animals found in Rolwaling Valley. However, the creature that fills the imagination of travellers to the valley is Yeti, the mythical man-like creature. The local Sherpa people of the region had told stories about Yeti for centuries. However, when British Mountaineer Eric Shimpton came up with a photograph which he believed to be of a Yeti footprint in 1951, the local Yeti myth became global.

Many people since then have reported to have spotted or even have photographed Yeti. However, none of these encounters have been independently verified. But the Yeti fantasy still rules the hearts and minds of climbers and trekkers to Rolwaling Valley. 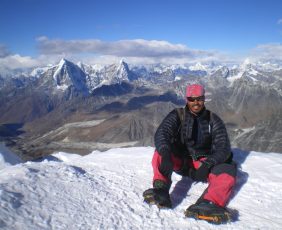