Rolwaling Valley is a hidden gem located in the north-eastern part of Nepal. Rolwaling valley is associated with many myths and folklores. It is known as ‘The Grave’ by the locals owing to its location. It is situated like a graveyard between the towering peaks of the Khumbu and Langtang region.

The myth of the Yeti is the most popular piece of folklore associated with Rolwaling Valley. People consider Rolwaling Valley as the home of the elusive mountain man Yeti. The locals of the region had told bed-time stories of Yeti to their children for generations. The Yeti myth was carried to all parts of the globe by early trekkers in the region.

However, the Yeti story gained unparalleled exposure when British Photographer Eric Shimpton came up with a ‘photograph’ of Yeti footprint in 1956. He had captured the photo while on the slopes of Mt. Gauri Shankar. Since then, a number of people have come up with their own version of Yeti ‘encounters’. An expedition from Indian Army in the Manaslu Region also came up with a ‘photograph’ of Yeti footprints in 2018. None of these photos and encounters have been verified widely till today. However, the concept of Yeti still looms large over trekkers in the region.

The largest glacial lake in Nepal, the Tsho Rolpa lake, lies on our way. It is situated at the height of 4,580 m. Few years ago, the lake was at the risk of exploding due to growing ice melt and subsequent water pressure. However, geologists found a safe way to drain out excess water without harming the ecosystem and the natural balance has now been restored.

The upper stretches of the Rolwaling Valley is settled by the Sherpa people. The Sherpa people are acclaimed mountain climbers. It is said that at least one Everest Climber lives in every house in the village of Beding. Beding is the largest village in the Rolwaling region. The oldest village in the region is Na. The villages reflect the culture and way of life of the people. Most of the people in the region are Buddhists and prayer flags flow away from the top of almost every house. The roof of the houses are made of stone and are designed with sharp inclination to help clear the snow automatically.

The forests in the region are full of pine, bamboo, fir and wild flowers of different varieties. Animals like Black Bear, Wolf, Jharal, Himalayan Tahr etc. roam the forests. The climate changes to arctic like in the upper stretches of the Rolwaling valley.

Mountain Peaks like Gauri Shankar (7,181 m), Dorje Lakpa (6,988 m), Rumdung (5,925 m), Khangtari (6,000 m) and Pachharmo (6,273 m) peak towards the sky from Rolwaling valley. The Tibetan border lies very close to Rolwaling Valley. The northern part of Nepal and Tibet have many similarities in terms of culture, climate, religion and way of life.

The most beautiful part of Rolwaling Valley Trek is that you can also venture into the Khumbu (Everest) region while returning back. You will need to have a few extra days to consider extending your trek to the Khumbu region. 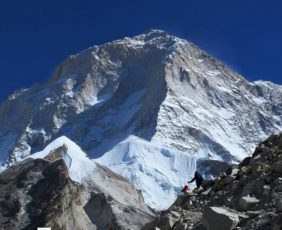 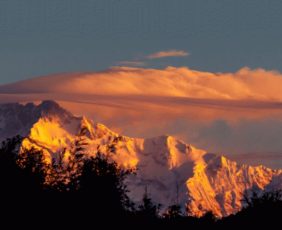 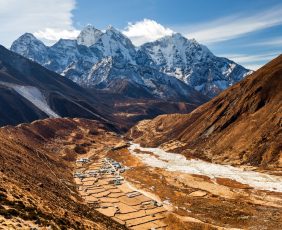 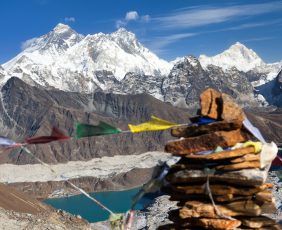