When learning about Mount Everest, expeditioners know it as the world’s highest mountain. They hear about its magnificence and the adventurous trails. However, Do you know about Everest Rainbow Valley? The dark side of this beautiful peak is unknown to many visitors. Climbing Mt. Everest has been on the bucket list of every adventure enthusiast. But most of these climbers are unaware of the dreadful death zone of Everest.

Only a few mountaineers know about Rainbow Valley Everest and the stories it holds. To learn more about this place in detail, continue reading below:

About Rainbow Valley Everest- the Dark Side of Everest

The name “Rainbow Valley” sounds quite intriguing and leads people to think it’s some beautiful and radiant place on Mount Everest. Well, it is a colorful valley but not as mesmerizing as it sounds.

Rainbow Valley Everest is also known as the Death Zone of Sagarmatha. It is called a dead zone because this part’s death rate is higher. The site is covered with the deceased bodies of many unsuccessful climbers.

The area was named Rainbow Valley because it looks as bright as a rainbow. Vivid jackets of red, blue, green, and orange have been covering the dead remains for ages. Aside from corpses, the various waste, bottles, tents, etc., appear colorful from afar.

Every year climbers visit the Khumbu region with a dream of summiting the Mighty Mount Everest. Some fulfilled their vision, some returned midway, but there are a few who never made it back.

Rainbow Everest Valley has rough surroundings with solid wind and thin oxygen levels. Most of those climbers lost their lives around the dead zone of Everest.

Also, the walkways to the summit are narrow, so a tiny mistake leads you straight to the Rainbow Valley. Each step only fits one climber; as a result, climbers are obligated to push the corpses off the trails.

Retrieving the bodies is risky and expensive, so the body count rises with an increase in death tolls. With time, Rainbow Valley Everest has become a graveyard.

So, every time a climber passes Rainbow Valley Everest, they see these bodies. Because of the cold, the bodies don’t decay and remain as fresh as ever in the death zone.

Yet, the desire to summit the almighty has been in process since the first attempt among expeditions. 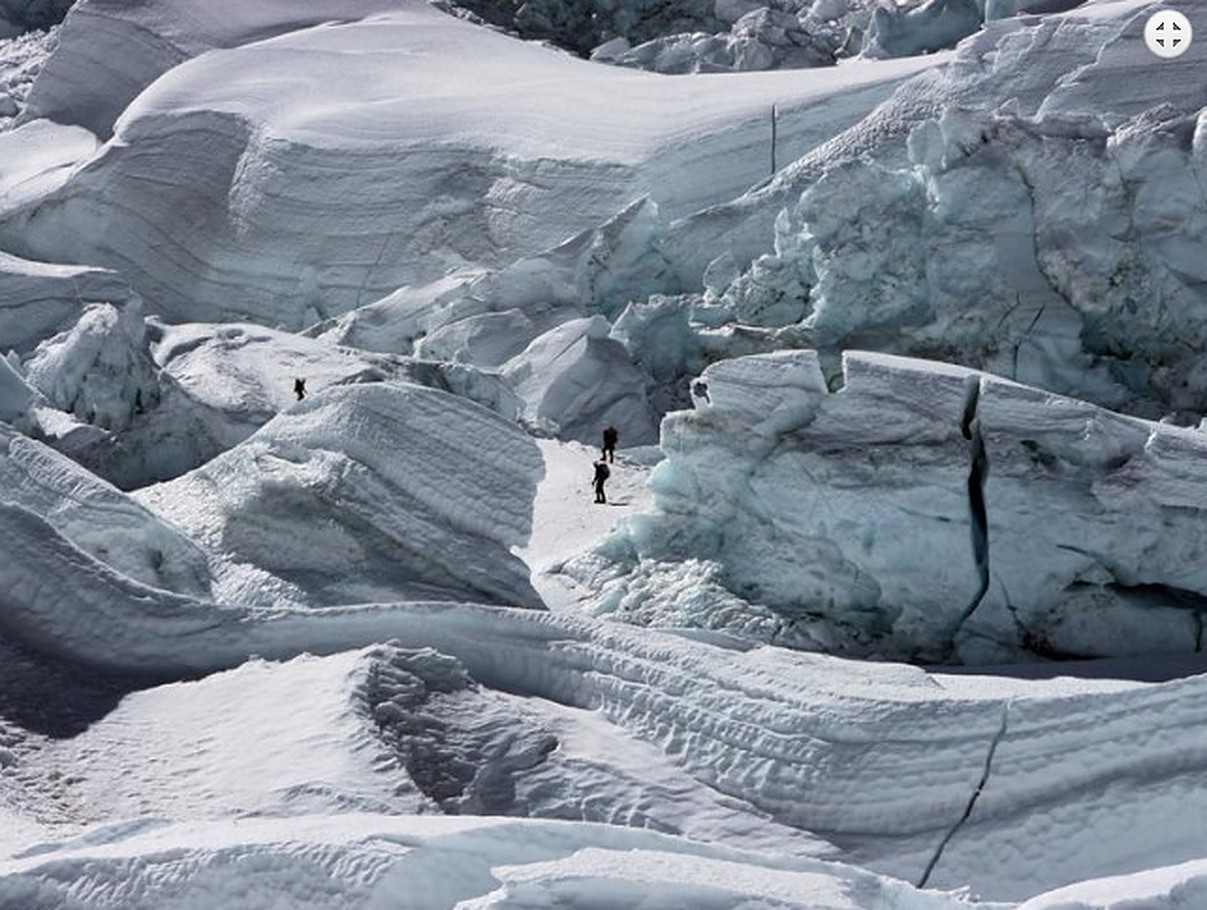 Where Does the Death Zone reside in Mt. Everest?

Rainbow Valley Everest is a landmark during the Expedition, so you are obligated to pass this area. If you think of it as an entertaining area in the trails, then you are wrong.

Rainbow Valley lies on the northern side of Mount Everest, right below the summit. Any part above 8000 m altitude is known as the death zone of Everest.

The death zone is the ultimate graveyard for climbers who fell from the cliff on their way to camp IV. From 1922 to date, more than 200 climbers have died in this valley.

You only find one-third of normal oxygen in this area, so the air is very thin here. It is necessary to carry auxiliary oxygen tanks while making your way to the summit.

Shortage of oxygen can be fatal at high elevations because it leads to altitude-related sickness. Plus, the news of human traffic on Everest that made its way to the headlines for days is the death zone.

During the peak season, climbers have to wait long hours in these areas, which increases the risk of casualties.

How was Rainbow Valley Everest Formed?

Everest Expedition commenced the formation of the Rainbow Valley. Many climbers dream of summiting Mount Everest and several have perished away in their attempts due to falls, AMS, and other fatalities.

On this Expedition, the route to the top is narrow, so people are compelled to push them to the rainbow valley. Thus, this is how the dead valley was formed.

Why do dead bodies keep sitting in the Death Zone of Mt. Everest?

To date, more than 200 bodies are residing in the rainbow valley. The piling of remains has begun since the first attempt to climb Mount Everest and is still going on.

The numbers will only stop rising when the Everest Expedition ceases. Till then, the Rainbow valley keeps on becoming more occupied and colorful. Many wonders why dead bodies keep stacking up in the Everest death zone?

The answer might sound straightforward, but rescuing or retrieving the body from Rainbow Valley is impossible. It is risky to carry and bring a still body down from 8000 m to 5000 m altitude.

In some cases, rescuers tried to retrieve the bodies but returned with nothing. Thus, leaving the body in the death zone is the best option. 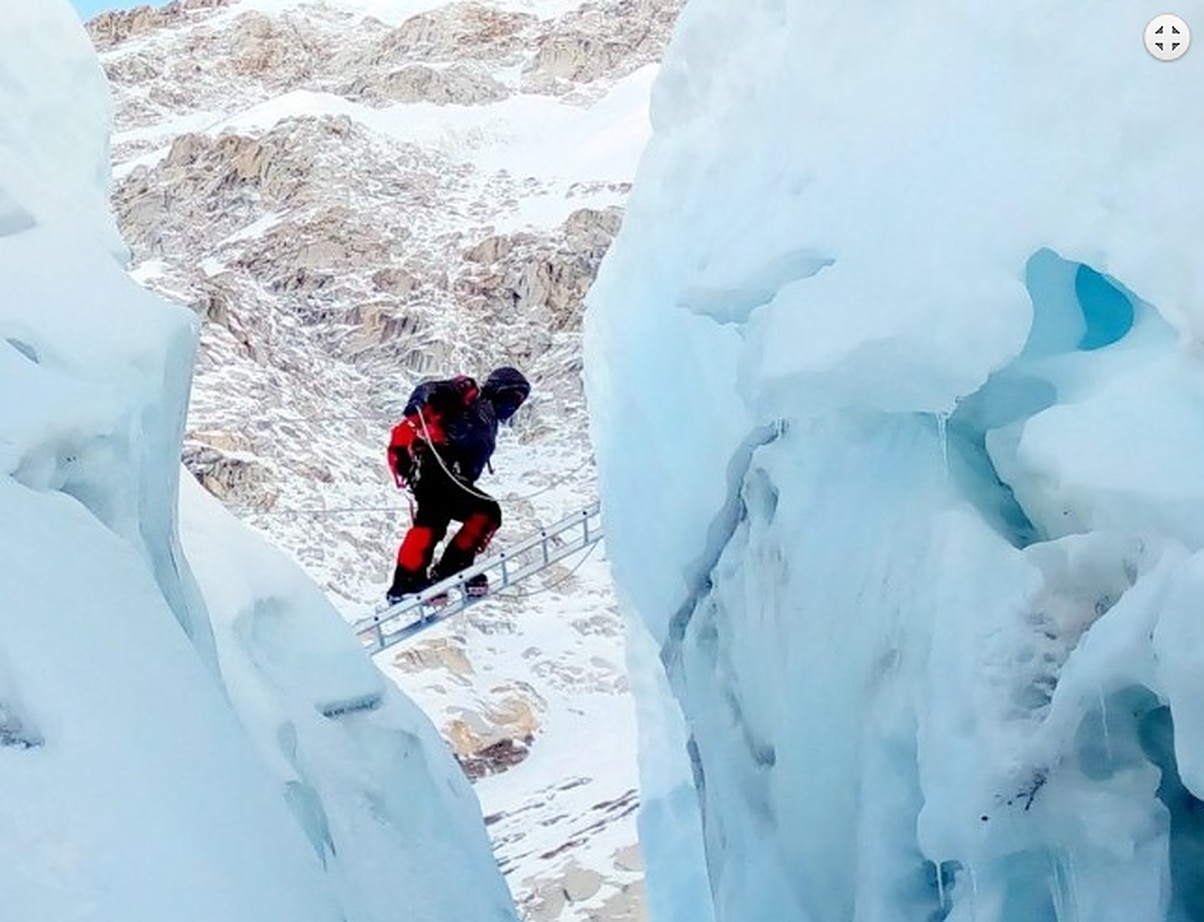 Main Cause of Death in Rainbow Valley Everest

The magnificent Mount Everest towers above all the Himalayan ranges. Being the world’s tallest peak, it has a reputation that attracts climbers from around the globe.

Like its reputation, the trails are also adventurous and dreadful, as a simple misstep can take a climber’s life in seconds. So, every step you take from 8000 m above swings between the point of survival and death.

To this day, more than 5000 climbers have walked the trails, and more than 200 have lost their lives. Rainbow Valley is the hype place where more of these deaths have occurred.

The winds are strong, the oxygen level is low, and trails are narrow in the death zone. Most demises were due to avalanches (about 41.8%), Falls, AMS (about 22.2%), exhaustion, and many more.

The dead bodies remain in Rainbow Valley forever. Some might get recovered, but almost more than half are impossible to retrieve. In this case, helicopter rescue is not ideal as strong hurricane wind blows near the summit in the death zone.

The weather is extreme, with a harsh climate and narrow trails making it risky to bring down the corpses. A single person can’t bring them down, and there isn’t much space for several people to help.

Thus, the recovery of bodies is unthinkable, only increasing the pile on Rainbow Valley Everest. 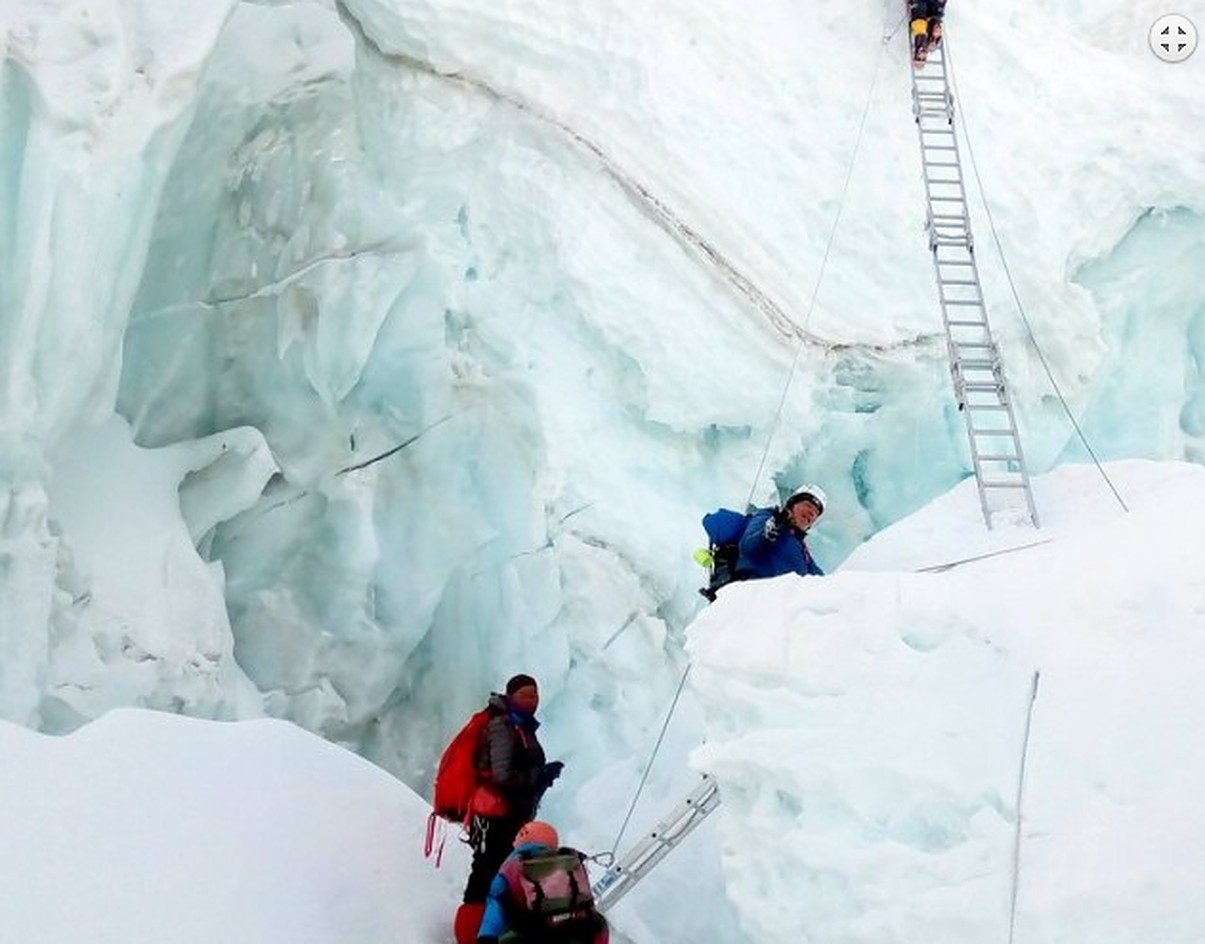 The Stories of Everest Base Camp

Before beginning the climb to Mount Everest, climbers group up in the base camp and make it their home for several weeks during the Everest Expedition; at that time, the base has a vibrant and fun atmosphere.

Climbers set up colored tents and performed several activities like dancing, singing, sharing, and telling stories. The folks have several old legends to share with the mountaineers about Everest, most of which revolve around the Rainbow Valley.

The tales prominently talk about the dead bodies. Some fascinating stories are about Hannelore Schmatz, Green Boots, and Sleeping beauty. If you are interested in these stories as well, read below:

Hannelore was a German mountaineer who became the first woman to perish on the lapse of Mount Everest. She and her husband decided to summit the mighty Everest in 1979.

To fulfill their dream of summiting the tallest peak, they joined a group of other six climbers and 5 Sherpas. They reached the top, and on their way back, Hannelore and Ray Genet (an American climber) decided to spend the night in the death zone with one of the Sherpas.

The two climbers were tired, so they did not return with the other climbers. However, it was an unfortunate night because an intense snowstorm hit their resting area.

Ray Genet died before sunrise due to hypothermia, while Hannah and the Sherpa were able to make it out of the frightful night. But life had other things planned for Hannah because as they were heading down, she fell on her back at 8290 m and never woke up.

Hannah’s body remains preserved in ice with her eyes open and hair blowing. Many travelers have passed by her corpse for years, but she has been swept over the ridge due to a strong wind.

However, there were words that five years after Hannah’s death, two climbers had attempted to recover her body, but they, too, died on the mission.

When hearing sleeping beauty, you must have thought about the folk tale. It is a bit different because this story doesn’t have a happy ending.

Sleeping Beauty is the story of Francys Arsentiev, the first American lady to walk the Everest trails without supplementary oxygen. She started her Everest Expedition on May 22, 1998, with her husband.

Like Hannah, she reached the summit; however, on her way down, she lost consciousness. She was stuck in the same spot for three days as no one came to her rescue.

After three days, a team did arrive, but by that time, she had suffered frostbite and was close to death. They tried their best to rope her down, but following several tries, they deemed it impossible and left her behind.

She took her last breath as she lay on her back in the backdrop of Everest. The way she was positioned looked like she was sleeping, so a climber named her “sleeping beauty.”

In 2007, Ian Woodall conducted an expedition to retrieve her body along with green boots. On May 23, 2007, Ian found her corpse and performed a brief ritual before dropping her body in a lower location. 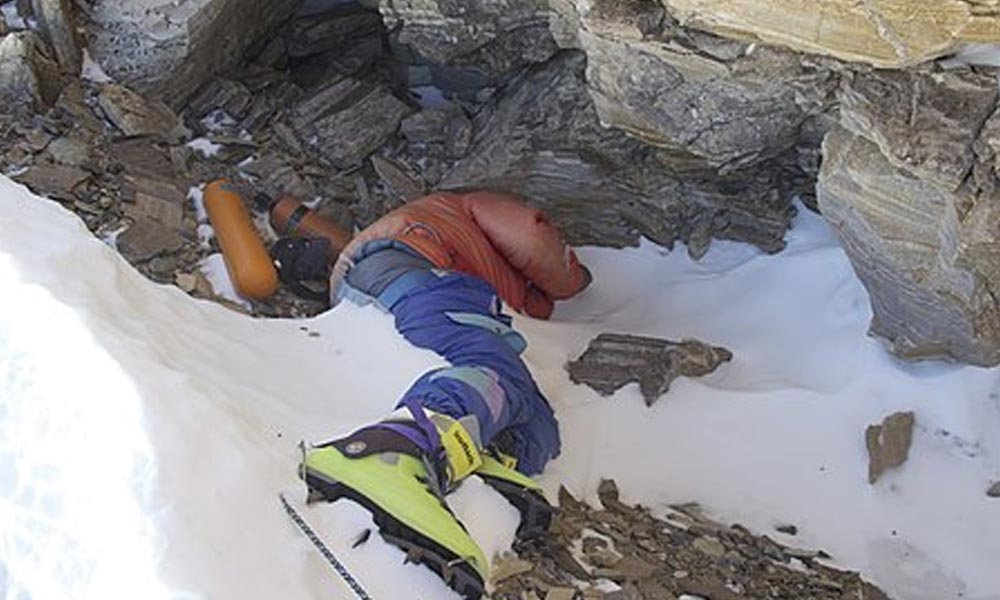 During story time in EBC, the folks never forget to mention the tale of Green Boots. This is one of the true stories of the Everest expedition, which is backed by the media as well.

On the northeast corner of the Everest trail lies a corpse with an oxygen tank on his back and wearing a pair of green boots. Yes, the remains got their name because of his shoes.

Folks assume that the body belongs to Tsewang Paljor, an Indian climber who was reported missing in 1996. He attempted to summit the Mighty Everest, but no news was heard once he left the base camp.

He was traveling with two other climbers, whose bodies had not been found yet. In contrast, the body is also believed to be of David Sharp, a Chinese mountaineer, as he was also wearing green boots and ascending alone.

However, the body of Green Boots has been residing in the small cave close to the summit for years now. It works as a map or rest spot for other climbers. The corpse is a famous landmark on the north Everest Trail.

On May 21, 2001, French climber Pierre Paper recorded the first video of Green Boots. In the video, he is facing the summit while lying on the left side.

Like Everything else, Mount Everest also has a dark side, and its two negative parts are the Rainbow Valley and Death Zone. If you think about them too much, then it might affect your mental health and reduce motivation.

It will only hinder you from achieving your goals, so accept the reality and prepare yourself psychologically and physically. Rainbow Valley Everest has been in the area since the start.

Many climbers have summited Everest through Rainbow Valley, so you may as well. If you are a professional climber who has scaled other summits but not Everest, you are surely missing out on a fantastic adventure.